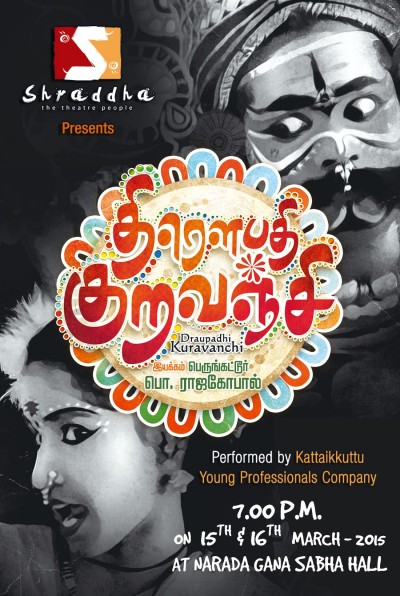 DRAUPADI KURAVANCHI tells the tale of Krishna’s and Draupadi’s dark quest to subvert the plans of the hundred Kauravas to eliminate their cousins, the Pandavas. It features the ritual of trance that empowers Draupadi-the-Kuratti to engage her enemies’ minds through psychological warfare while playing on their inner-most secrets and confronting them with their own sacrificial deaths on the battlefield in a horrific, fraternal, future war. The play shows us the ambivalence of the iconic Draupadi ― a caring, auspicious mother carrying her baby on her hip and a vengeful goddess demanding the sacrificial death on the battlefield of those who have humiliated her.

DRAUPADI KURAVANCHI has been reinterpreted and reworked from an all-night play into a 90 minutes version by P. Rajagopal. Hanne M. de Bruin is the assistant director and costume designer.